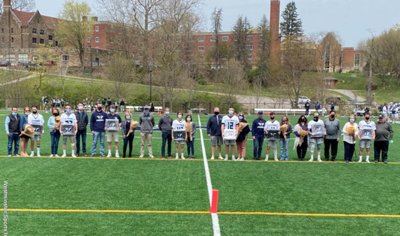 NEW WILMINGTON, Pa.– Six years ago, the Westminster Titans Men’s Lacrosse team was formed for its first colligate season in 2016. Since then, the Men’s lacrosse team has had all but one winning season since becoming a varsity program. In six years, the team has already made it to a conference championship during their 2019 season. In that same season the team was chosen to compete in the Eastern College Athletic Conference Tournament (ECAC) making it to the championship game against Frostburg State who now competes in Division 2, loosing by only two goals. With the Men’s lacrosse team finding success early on, they hope to continue their upward trend by playing in the Presidents Athletic Conference Tournament in the coming weeks.

What is the cause for such early success on the team? The answer is quite simple, a young coaching duo of Head Coach Travis Brown and Assistant Coach and Offensive Coordinator Ryan Stow. There’s a few more pieces to the Titans Lacrosse team that are just as important, the class of ’21. What’s so special about this specific class you might ask? The class of 2021 has been the backbone and catalyst of the team. The class is made up of  eight men who have brought success to this team since day one. Those eight men are made up of Shane Fisher, Nick Trella, Tyler Dahlkemper, Jack Granahan, Romano Veneziano, Ben Romah, Steven Knight, and Jesse Dodd. These eight men have been nothing but role models for the younger members of the time as well as anchoring the team through its last four seasons. I had the privilege to speak with Senior long pole Romano Veneziano on their time of leading this team coming to an end. Veneziano said “It’s been an amazing four years of playing around a group of such amazing guys.” “It’s been up and down for the past four years just like any sport has, but our time is coming to an end and we are itching to end our time here on a positive note.”

The Titans Men Lacrosse team has one last game remaining before they look to make another run to the PAC Championship and bring the first Men’s Lacrosse Conference Championship here to Westminster.