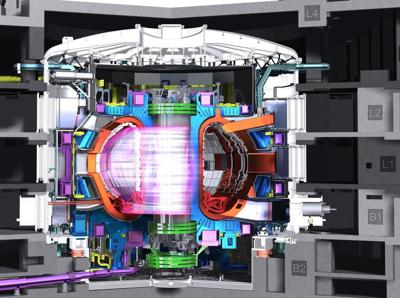 Even though there’s been a notable drop in price for renewable energies like solar and wind, there may not be enough resources for these to help drastically in the future. However, nuclear fuels may play a key role when it comes to cleaning up carbon from our energy sectors. And, no, I’m not talking about fission reaction plants like 3-mile and Shippingport with the large bellowing steam stacks. I’m talking about nuclear fusion, with its jokingly perpetual 30-years-away target and the new breakthroughs that may let us see it before that 30-year threshold.

There are two main types of nuclear energy—fission and fusion. In a fission reactor, a neutron is blasted at an unstable Uranium-235 atom to split it into smaller sections, including more neutrons. The new particles continue the chain and hit the other Uranium-235 atoms and causes the chain reaction effect. The breakdown of the Uranium creates a lot of heat which is captured by surrounding water and then is boiled to turn a turbine producing electricity. A fusion reactor is built to replicate what already happens in our sun when hydrogen isotopes split and then merge into helium nuclei, under astronomical pressures and temperatures. In this case, the fusion reaction produces 4 times more energy than the fission process.

As opposed to using super heavy and potentially dangerous elements like uranium and plutonium, which also carry implication when not in use, simple and cheap elements like deuterium and tritium get dumped into a fusion core. Deuterium is very stable and tritium radioactivity doesn’t last long, making these safer. Not only are they safer, but they’re more viable in nature. Deuterium can be extracted from the oceans while tritium is made during fusion when electrons interact with lithium. In relative scale, just one gram of tritium and 3 grams of deuterium releases enough energy for one person for an entire year once fused.

So, we have our winner for nuclear energy production, however with the implications involved with trying to bring the power of the sun to earth there’s a joke in the fusion community saying that it will always be 30 years away. Simply put, no reactor has come close to a net thermal gain of power from their reactor. It takes an immense amount of power just to get these things started, and in order to keep a fusion ball confined in an electromagnetic field, it also takes a lot of energy to run. These reactors must be able to run the whole facility along with powering everything outside of it. The biggest and perhaps the most promising fusion reactor is the ITER project in France which is set to be functional by 2025 and expected to have a net gain of 10x what is put into it. However, its designed to be a test reactor and won’t reach full operation until 2035. So, even if its 100% sound, we still have a lot of time before we have a working reactor design, and even then, we still must wait until that’s built.

The magic of these reactors comes from the insanely large magnets that surround the fusion chamber. By using their magnetic fields to confine a plasma that reaches temperatures of 100 million kelvin, these are needed so the fusion reaction doesn’t melt the entire apparatus. Its from these massive magnets that we have had our latest breakthrough. The Massachusetts Institute of Technology, in conjunction with the Commonwealth Fusion systems start-up, has designed one of the most powerful magnets on earth. Using high temperature super conductors, they found a way to increase magnetism with substantially less energy input. Its breakthroughs like this that will lead us to fusion, but also take significant time to find and learn about all the materials needed to control a fusion reaction at scale. Taking a full size HTS conductor and running simulations with a full-size reactor alongside it proved very successful. Using this new tech, a small-scale reactor called spark was commissioned and is in its finalization of design phase right now. This reactor will come out in 2025 to demonstrate a fusion reactor with a net output of energy over 1.

So, it doesn’t look like we will have anything of true workability until then, but even 2025 isn’t that far away, as compared to some of the other reactor projects out there.