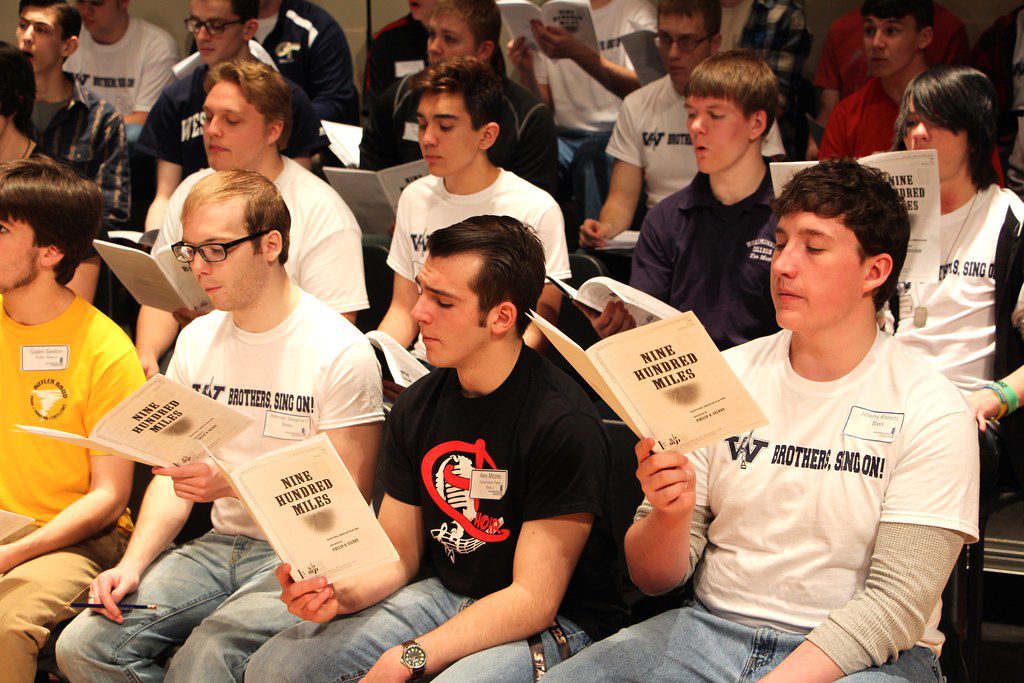 Westminster College’s School of Music will be holding a celebration of vocal chorales Feb. 18 at 2:00 p.m. “Brothers Sing On! Sisters Sing On!” features Mother Fair’s voices in the form of the Men’s and Women’s Choirs as well as guest singers from surrounding school districts. Beaver County Christians, Blackhawk, Butler, Grove City, Laurel, Lincoln, Lincoln Park, Mercer, Neshannock, Slippery Rock and Wilmington High School choruses will each be featured in the “Brothers Sing On! Sisters Sing On!” concert.

WC’s Men’s and Women’s Choirs will each perform for the visiting high school students.

The Men’s Choir, directed by music professor Dr. Andrew Withington and accompanied by Irina Trenga, will perform a variety of songs thematic of sea shanties and nautical rhythms. On par with their music theme, the men will don sailor hats during the performance. The choir pulled a similar stunt previously during the “Brothers and Sisters Unite” concert during the Fall 2019 semester, to the pleasure of the audience. Incorporating the hats during this concert will continue to engage the audience as well as display to the visiting high school students the whimsy collegiate choirs can behold. The Men’s Choir is also rehearsing pieces that incorporate rhythmic clapping, a technique that traditionally helps choirs sing on beat while also entertaining their audience.

In preparation for the Brothers Sing On! Sisters Sing On! concert, both Men’s and Women’s Choirs have rehearsed their pieces three hours per week during class times. In particular, the groups’ directors are ensuring the choir members focus upon diction, dynamics, and other details of each piece.

Both the Men’s and Women’s Choirs will also perform alongside 264 members of the 11 high school choirs.

First-year Dan Horgan said, “Personally, this concert will be the biggest combination of choirs I’ve ever been a part of, so it’s an awesome opportunity to meet singers from the area.”

High school choirs often have the opportunity to send select students to audition for prestigious ensembles, such as District, Regional or National Choirs. One thing students most enjoy about such opportunities is bonding with students from other schools who are just as passionate about music as themselves. “Brothers Sing On! Sisters Sing On!” will create a bonding experience similar in breadth and importance. The day’s ensemble will be comprised not of a variety of schools, but a single choir community. The day will be celebrated through rehearsals that culminate in a performance in Orr Auditorium.

This event was first created by past WC choir director Samuel Barbara, who instigated the “Brothers Sing On” portion of the concert. Withington resurrected Barbara’s concept of combining high school and collegiate choirs, but wanted to do so with a component tailored for the sopranos and altos of the choir. Thus, the “Sister” component of the concert was created. Withington intends Brothers Sing On! Sisters Sing On! to be an annual event.

“Partnering with the high schools gives us the opportunity to share the joy of music and show that it doesn’t have to end in high school even if you don’t plan on being a music major [in college], sophomore Owen Meilander said. “It will give the students a fun and inspiring day of making music with other passionate students, both high school and college.”